Maxtech has an option to acquire a 50% interest in this block of claims located 28 km from Atlin in northwest British Columbia, by paying $20,000 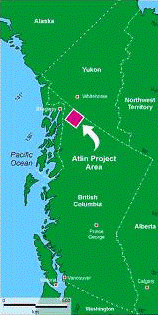 Seasonal access to the site is available from Atlin, via the Surprise Lake road through an informal road maintained during the summer months by the miners on Spruce Creek and O’Donnell River.

The primary targets on the claims are in terrain that is very open with a few copses of short alpine type spruce. The ground is gently rolling and has almost no rock outcrop. The trails, drill pads and trenching will be low-cost due to these factors.

In October 2007 the Company announced that it had retained the services of Geotronics Consulting Inc. to carry out 150 line-kilometers of ground magnetic and electromagnetic surveys in conjunction with an MMI soil sampling program and geological mapping on the optioned claims.